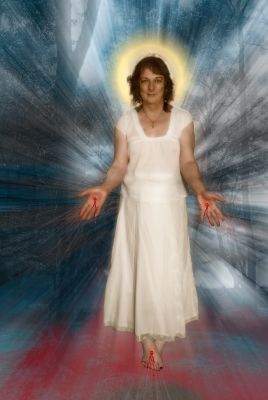 Over 300 people demonstrated outside the Tron theatre in Glasgow last night over the depiction in Jo Clifford’s new play of Jesus as a transsexual woman.

My view… I’m not about to join the crowd who were penning hate-fuelled placards, that’s for sure.

First though, let’s be clear. Was Jesus transsexual? Highly unlikely. In the 4 accounts of his life (the gospels) Jesus is consistently and exclusively portrayed as a fully human male.

However, do I think God is male? No. Does God transcend sexuality? Yes. God is triune (Father, Son and Holy Spirit). John’s gospel starts by explaining (describing Jesus) that “In the beginning was the Word, and the Word was with God and the Word was God. He was with God in the beginning”. Jesus lived on earth as a man around 2000 years ago, but he existed before then, at the creation of the earth, and he continues to live today, one interdependent part of the trinity. For another modern characterisation of God you need go no further than a (fabulous) book like The Shack to have your preconceptions challenged.

Is the play intended to cause offense? I haven’t seen it, so take all of this with that caveat, but I don’t think so. According to an interview with Clifford in the Scotsman:

“Jesus, Queen of Heaven, which portrays Jesus as a transsexual woman and has been condemned by elements of the Christian community, is “about rescuing Jesus from the fundamentalists”. But it’s also about Clifford’s pride in being transgendered; she insisted on performing the role herself. Her honesty is striking and within minutes I get a one-woman show of her memoirs, starting from the beginning, Clifford peppering her lines with laughter and relishing the story of her own life.

It’s taken her a long time to get here. “There is an awful lot of hostility towards transgendered people,” she says softly. “I’d internalised a lot of that and was terribly ashamed. I was ashamed for most of my life.” These feelings formed the subject matter of a play Clifford wrote in 2002, when she still was identified as John, called God’s New Frock. The new play is the sequel. “God’s New Frock was partly an autobiographical piece about growing up transgendered and trying to suppress it,” she explains. “The story I told was of me and God in parallel.”

There’s a trailer for God’s new frock here. It looks to me more like an autobiographical attempt to understand how Jesus relates to a personal situation than anything else. Or am I wrong? I’m open to suggestions as to how else I should look at it.

No doubt there are those who will discard both plays out of hand as blasphemous. Maybe they’re right; I’m not sure. Even if I was, I don’t think shouting it down would be helpful. Building relationships and getting round the table to work through an issue isn’t usually facilitated by reciprocal insult-slinging.

What I do think is that it’s complicated. I think there’s something to be said for Clifford’s desire to “rescue Jesus from the fundamentalists”. We (and I mean everyone, but maybe especially people of faith, who seem to think we can claim “right” understanding of the Bible) need to consider what it is we know about God through the Bible very carefully. I do believe that objective truth is there to be had, but the Bible is a complex ancient collection of texts, and must be recognised as such.

I was privileged to hear and be challenged by a gay bishop, Gene Robinson talk on the subject of our biblical understanding of sexuality earlier this year at Greenbelt. It was interesting to hear just how persuasively he made the case for the alternative to the mainstream evangelical view.  It encouraged me to reflect on how easy it is for us to twist (in many different directions) the Bible’s teaching to fit our cultural norms. God’s Word needs and deserves to be handled with care, respect, and with a realisation of our potential to twist it. For those of faith – in which I include myself – that means being self-aware, studious, careful and most of all prayerful in considering what God wants me to understand from scripture.

The other thing that strikes me as I ponder Clifford’s interview and the trailer for God’s New Frock is (yet again) how sad it is that the best we seem to be able to do as a Christian community is to react to things in such a way that, as Jesus’ followers, we’re viewed as judgmental and exclusive rather than loving and accepting of people for who they are. I struggle to see how protesting outside the Tron fits with following Jesus’ example. Surely we can learn to love better than that.